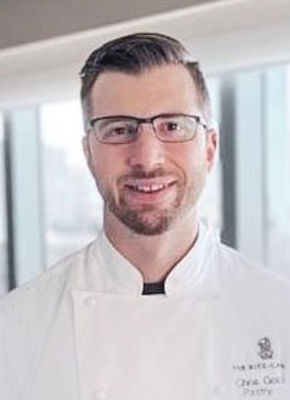 The award-winning, AAA Five-Diamond Ritz-Carlton, Boston, located in downtown and across from the historic Boston Common, is pleased to announce the appointment of Christopher Goluszka as Pastry Chef. Drawing upon experience acquired in pastry departments in some of the leading luxury hotels in the United States and independent restaurants in Boston, Goluszka will oversee all pastry operations for The Ritz-Carlton. He will design and curate desserts for the hotel's onsite food and beverage outlets including Artisan Bistro and Avery Bar, and will also oversee menu creation and desserts for banquets and social functions, in-room dining, and guest amenities.

When asked about his plans in his new role, Goluszka says he's already added a Boston cream pie cheesecake and a decadent chocolate cake to the Artisan Bistro dessert menu. His focus will be to curate more elevated desserts that are executed simply and elegantly.

Goluszka joins The Ritz-Carlton, Boston most recently from The South End Buttery where he was Head Baker and Pastry Chef producing pastries and desserts for the cafe, catering, take-out and acclaimed restaurant. Prior to this, Goluszka served as Pastry Sous Chef for the Encore Boston Harbor, overseeing production of all desserts for five restaurants. Goluszka also worked for several years as Pastry Cook at The Langham Hotel in Chicago where he planned and produced weekly dessert specials for afternoon tea and the hotel's onsite restaurant. He also spent several years working in the pastry department of The Ritz-Carlton, Chicago (formerly a Four Seasons Hotel.) He got his start as Morning Baker at Cafe Bon Appetit in Wheaton, IL and then Lead Baker at Oak Brook Hills Marriott Resort in Oak Brook, just outside of Chicago.

Goluszka is a graduate of The Cooking and Hospitality Institute (Le Cordon Blue Baking & Patisserie) and The French Pastry School (Modern Sugar Showpieces & Elements of Design), both located in Chicago. Goluszka grew up in Elmhurst, IL. Beyond baking, he enjoys traveling with his wife as much as he can, walking his dog around Somerville, MA where he resides presently and enjoying the city's vibrant coffee scene.