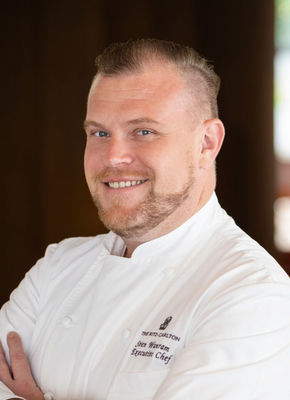 As the newly appointed Executive Chef of The Ritz-Carlton, Millenia Singapore, Sven is responsible for overseeing its signature dining outlets - Colony, the one MICHELIN star Summer Pavilion, and Republic - one of Asia's 50 Best Bars, in addition to in-room dining, banqueting and offsite catering operations.

Sven brings with him 19 years of culinary experience within the hospitality industry. No stranger to The Ritz-Carlton brand, he has held positions in four Ritz-Carlton properties - Wolfsburg, Guangzhou, Grand Cayman, and most recently in Nanjing, as part of its pre-opening team in 2017.

Sven's passion for food was inculcated from a young age after spending most afternoons after school helping out in his grandparents' butchery. In 2003, he started at the Maritim Airport Hotel Hannover as an apprentice and grew into the role of Commis de Cuisine. He then joined The Ritz-Carlton, Wolfsburg, and worked his way up to Chef de Partie at the three MICHELIN star Aqua. Following stints at Hotel de Rome and Vienna International, he returned to The Ritz-Carlton family in 2011 as Sous Chef at The Ritz-Carlton, Guangzhou.

Sven has achieved much success in leading culinary teams and in maximising food and beverage profit revenue. During his two-year stint as Executive Chef at JW Marriott Hong Kong in 2013, he led the transformation of JW Grill into FLINT Grill & Bar, which achieved a stellar HKD 40 million in revenue within a year of opening.

During his two years at The Ritz-Carlton, Grand Cayman from 2015 to 2017, Sven spearheaded the annual Cayman Cookout, which featured 48 events helmed by world-renowned chefs over the course of the four-day food festival.

As part of the opening team of The Ritz-Carlton, Nanjing, Sven launched four restaurants and two lounges while developing operating procedures and building a team of 120 Ladies and Gentlemen. He has also participated in various pre-opening taskforces for several properties under Marriott International's luxury portfolio, and was a culinary advisory board member from 2018 to 2022 for Marriott's luxury brands in greater China.

Having made Singapore his new home, Sven enjoys discovering new restaurants and exploring local enclaves with his wife and daughter.