While the longer economic growth endures, intuitively the risk of recession rises. Despite GDP indicative of a slowing economy during Q4 2019, the U.S. economic expansion which commenced in June 2009, is soon approaching the longest post-World War II expansion with uninterrupted growth. Investors frequently ponder where we are in a cycle. Is the current economic climate most like 1995, 1999, 2000, 2003, 2008 or 2016? While history often rhymes, the reality is we are in 2019, which presents its own set of idiosyncratic risks and opportunities. Many economists have opined that expansions do not die of old age, rather they expire due to an unpredictable event(s) such as shocks to oil prices and/or the bursting of asset bubble(s).

As the U.S. economy goes, so goes the nation's lodging sector fundamentals. Although the hotel industry has been operating at peak levels for several years, accelerated supply growth, which has been readily absorbed in most markets due to the expanding economy, has contributed to weaker than normal average room rate growth. Furthermore, despite shortages of and escalating costs of labor, on average nationally hotel owners and managers have sufficiently controlled other operating costs to achieve the highest levels of gross operating profit margins in more than fifty years. With this said, due in part to rising minimum wage rates, profit margins of numerous assets situated in major U.S. markets have contracted.

Current threats to the U.S. lodging industry include (but are not limited to): continued international trade tensions and effects from tariff rate implementation, domestic and international political uncertainty, natural disasters, terrorism, maturation of Airbnb as it delves deeper into the mainstream hotel market, and OTA pricing transparency placing negative pressure on room rate growth. The sector continues to be challenged with continued historically low unemployment and rapidly rising wages, as well as property tax and insurance expenses increasing at levels well above underlying inflation. Although the nation is experiencing a slowdown of inbound international demand, domestic air passenger growth remains steady. Notwithstanding a cautious backdrop due to a variety of heightened macro/growth concerns, hotel financing continues to be widely available with debt providers competing by narrowing spreads even with interest rates falling once again. Furthermore, an array of investable foreign and domestic equity is broadly available as record amounts of capital chases yield.

While the fundamentals of the U.S. lodging industry are simultaneously favorable to buy, sell, refinance, and develop a variety of lodging product types, and the near-term outlook for lodging remains positive, given a myriad of global and domestic issues that can rapidly develop into full blown crises, short term future industry performance is fragile. 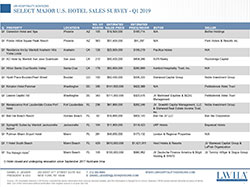