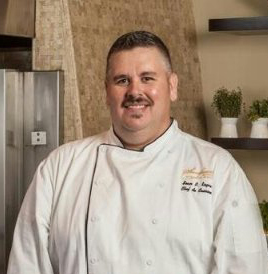 Wyndham Grand Clearwater Beach is thrilled to announce the appointment of Chef Sean Ragan as Executive Sous Chef of the property, overseeing direction of its signature restaurants, banquets, and in-room dining. Chef Ragan joins the Wyndham Grand with over 25 years of professional experience in the hospitality and restaurant industries. Chef Ragan brings extensive experience to Wyndham Grand Clearwater Beach, previously working at Caretta on the Gulf at the Sandpearl Resort. Throughout his career, he had been handpicked to train with highly regarded chefs such as Julia Child, Paul Prudhomme and Martin Yan, and cooked for other top restaurants including Oystercatchers under Chef Hans Hickel and Innisbrook Golf Resort and Spa as Executive Sous Chef. Chef Ragan is an ideal addition to the team, which is comprised of internationally praised Executive Chef Claude Rodier and renowned Chef de Cuisine, Chef John Capponi. A prominent figure in the Tampa area culinary scene, Chef Ragan has received countless accolades and recognition for his leadership at Clearwater’s Sandpearl Resort. Most recently, Chef Ragan was named the 2015 Best Chef of Clearwater Beach. Born in New York, Chef Ragan was exposed to a melting pot of flavors and cultures, developing a passion for cooking and global cuisine. He received his degree with honors in Culinary Arts and Hotel Restaurant Management in 1994 from Johnson & Wales University in Providence, Rhode Island. He is ACF Certified, a recipient of the honored Le Cordon Bleu Medallion and belongs to the historic and distinguished Chaine des Rotisseurs and Societe Mondiale du Vin.