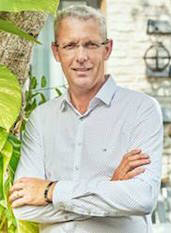 Andaz Mayakoba Resort Riviera Maya, an upscale resort nestled in the heart of Mexico's Caribbean beachfront, is pleased to announce the appointment of hospitality veteran Pascal Dupuis as General Manager. In his new role, Dupuis will manage all aspects of the luxury resort and its day-to-day operations including the 214 guestrooms and suites, Naum Wellness & Spa, four diverse restaurant concepts as well as 14,000 square feet of meeting and event space. He will also focus on the training, learning and development of the staff.

A hospitality veteran with more than 30 years of experience, Dupuis began his career in his home country of France when working as a receptionist at the Negresco Hotel in Nice. After working at several other French hotels, Dupuis moved to London in 1993 where he quickly climbed the ranks in the hotel industry, holding managerial positions at properties including Le Méridien Piccadilly, The Sheraton Park Tower and St. Martins Lane, before returning to France as the General Manager of Hotel De La Tremoille in Paris. Dupuis has served as General Manager at some of the leading resorts in the world including the One&Only Le Touessrok in Mauritus, The Leela Kempinski Goa, where he brought the resort back to its five-star standard to make it the most successful resort in India, and The Leela Palace Chennai, which he opened. Prior to joining Andaz Mayakoba, Dupuis served as General Manager for two properties within the Address Hotel & Resorts brand including The Address Dubai Marina, where he immensely raised the hotel and restaurant's position in the market within the first six months of joining the team, and The Address Boulevard Dubai, where he oversaw the successful opening.

Pascal now resides in Mexico with his wife and daughter. In his spare time, he enjoys playing tennis, golf, go-karting, watersports, traveling and cooking.

25 September 2020 — Hāna-Maui Resort, A Destination Hotel, proudly announces the appointment of Jon Benson as general manager of the hotel, which recently joined the Hyatt portfolio. In this new role, Benson is responsible for management, operations and marketing of the resort, suites, bungalows and family residences, as well as assisting with the rebrand of the resort.
read more

28 August 2020 — Billy Sun has been appointed as General Manager of the Grand Hyatt Hefei. Billy has more than 19 years of experience in the hospitality industry. In 2001, Billy commenced his career as a Sales Manager at the Crowne Plaza Guihe Jinan and over the subsequent 13 years rose through the sales, marketing and management ranks at Crowne Plaza Guihe Jinan, Crowne Plaza Hotel Dandong and Sheraton Jinan Hotel.
read more
More from Hyatt
Map
Advertisements
Never miss a story again
Sign up for the HN360 daily newsletter
Media Kit – Submit Content
Advertisement
Advertisements