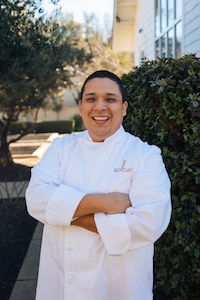 Framed by the soft ridges of the nearby mountains and sprawling Napa Valley vineyards, Solbar at Solage, Auberge Resorts Collection is thrilled to announce the appointment of Gustavo Rios as executive chef. Rios has over 20 years of experience working at luxury properties and some of the best restaurants in the U.S., including a previous stint of seven years at Solbar where he mastered his culinary skills. During his previous tenure at Solbar, he played an integral role in achieving the Michelin star award with the team that successfully launched the restaurant and inspired top selling dishes that became menu mainstays making the restaurant one of the most sought-after dining destinations in the region. In his new role, Rios will draw on his deep, longstanding relationships with top Napa Valley farmers and winemakers to further elevate the food and beverage program as well as oversee all culinary operations on property including Solbar restaurant, the heart of this Calistoga resort and a neighborhood hot spot.

Prior to his return to Solbar, Rios joined forces with Solbar veteran, Chef Brandon Sharp to create the concept for Calistoga-based French bistro, Evangeline where he also served as the executive chef and helped open the restaurant in 2015. He also held culinary leadership roles at Michelin star-rated, Bouchon Bistro in Yountville, AAA Five Diamond property, The Inn at Little Washington in Virginia and at the award-winning Peninsula Beverly Hills.

Auberge Resorts is a luxury hotel collection of exceptional resorts, residences and private clubs, each with a distinctive personality that assures a memorable guest experience. While Auberge Resorts nurtures the individuality of each establishment, all are characterized by a set of communal elements: intimate, understated elegance; captivating locations that inspire exceptional cuisine and spa experiences; and gracious yet unobtrusive service.
more information
Recent Appointments at Auberge Resorts Collection

6 December 2019 — Born and raised in Fiji, Miller received a Bachelor of Commerce in Hospitality and Tourism Management from the Blue Mountains Hotel School in Sydney, Australia. After graduation, he began a one-year intensive Manager In Training program at Four Seasons Sydney, where he learned all aspects of food and beverage operations management before working full-time at the property.
read more
More from Auberge Resorts Collection
Map
Advertisements
Never miss a story again
Sign up for the HN360 daily newsletter
Media Kit – Submit Content
Advertisement
Advertisements