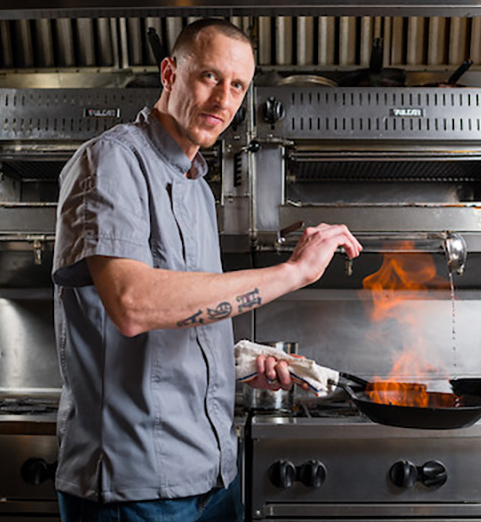 Hotel Revival, a Joie de Vivre hotel located in the heart of Baltimore's historic Mount Vernon neighborhood, is pleased to welcome Scott Hines as the new executive chef. Chef Hines will collaborate to bring new life to the hotel's food and beverage program, which includes Topside, Square Meal and B-Side Cocktails and Karaoke as well as private events and room service.

As the executive chef, Chef Hines is responsible for directing and over-seeing the entire food service operations throughout the property. He will develop menus for each outlet as well as special events and private events while ensuring quality assurance in culinary operations. He will manage the team, oversee budgets and work with Chapon to provide an exceptional experience for guests.

Chef Hines' passion for the culinary world dates back to his pre-teen years when he learned the ins and outs of the kitchen at a Philadelphia restaurant where his father was a chef. Since then, Chef Hines has worked several positions, including his most recent position as executive chef at Baltimore's B&O American Brasserie, where he led the culinary team for the past three years. Prior to that, Hines was the chef de cuisine at Monogram Hospitality.

24 June 2020 — Ambassador Chicago, a Joie de Vivre Hotel, today announces the appointment of Jenna Haymond to director of sales and marketing. Haymond brings over a decade of hotel experience and expertise in boutique hospitality to her new role.
read more

22 June 2020 — In his new role, Chef Vaiciunas is responsible for directing and overseeing food service operations throughout the property. He develops menus for the hotel's food and beverage establishments, as well as special events, private events and in-room dining options while ensuring quality assurance in culinary operations.
read more

15 June 2020 — Hyatt Hotels Corporation has announced a changing of the guard at Hyatt Regency Sydney, installing Jane Lyons as the property's new General Manager. A widely respected industry leader, Lyons moves to her new role from the GM spot at West Hotel Sydney, Curio Collection by Hilton - a change of desk and company but only one block down the street, with both properties located on Sussex Street in the Sydney CBD.
read more
More from Hyatt
Map
Advertisements
Never miss a story again
Sign up for the HN360 daily newsletter
Media Kit – Submit Content
Advertisement
Advertisements