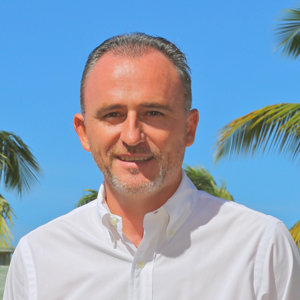 A native of San Sebastian, Spain, Stembert has always been inspired by excellence and innovation. After earning his Diploma in International Hotel Management from Le Roches Global Hospitality Education in Marbella, Spain, Stembert gained valuable experience throughout his home country, at The Westin La Quinta Golf Resort in Marbella; The Westin Palace in Madrid; and Hotel Alfonso XIII, A Luxury Collection Hotel in Seville. From there, island life called and he headed to Mauritius, where he held the positions of director of rooms and director of operations at The Grand Mauritian, A Luxury Collection Resort & Spa.

Stembert, who speaks English, French and Spanish, and his wife Loubna (whom he met on his first day of hotel school) enjoy their free time playing tennis, having a beach day, watching movies, and travelling with their two children Sofia and Nicolas.